The Goodwood Festival of Speed took place last weekend, playing host to one of the most terrifying and exciting world record attempts of all time!

Stuntman Terry Grant took to the track in the all-new Nissan Juke NIMSO RS in an attempt to break his own world record for the fastest mile travelled on two wheels in a four-wheeled vehicle. He was allowed to make six attempts at the previous record of two minutes and fifty-five seconds – previously set by himself at the 2011 Goodwood Festival of Speed.

Terry smashed his own record on his first attempt, recording an amazing time of just two minutes and ten seconds, shaving forty-five seconds off of his previous world record.

“I was shocked at how much faster the Juke NISMO RS was and to take 45 seconds off what was already a quick time was unbelievable," said Grant. “To break it by so much on my first attempt was a great way to kick off the weekend and I'm looking forward to seeing if I can go faster."

The Nissan Juke NISMO RS was the perfect vehicle for the attempt, with its large frame making it easy to balance on two wheels and the 218bhp 1.6-litre Direct Injection Gasoline Turbo (DIG-T 218) engine providing plenty of power.

Check out the footage in Nissan's video; 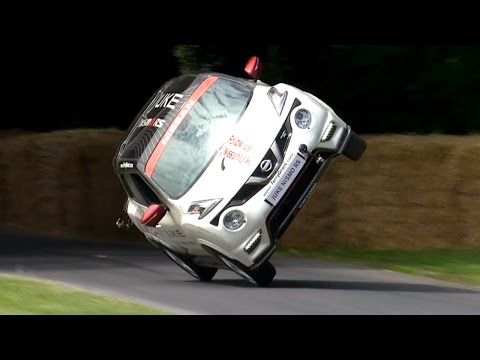 Company Info
Back to Top

Glyn Hopkin Head Office, 279-289 London Road, Romford, United Kingdom, RM7 9NP
Reg Office: Head Office: Glyn Hopkin Romford, 279-289 London Road, Romford, Essex, England, RM7 9NP
Reg Office: Glyn Hopkin Ltd, 10 Queen Street Place, London, EC4R 1AG
Reg. Company Number: 2756516
VAT Reg. No. 597406403
Glyn Hopkin Limited is an appointed representative of ITC Compliance Limited which is authorised and regulated by the Financial Conduct Authority (their registration number is 313486). Permitted activities include advising on and arranging general insurance contracts and acting as a credit broker not a lender. We can introduce you to a limited number of finance providers and may receive a commission from them for the introduction. All finance applications are subject to status, terms and conditions apply, UK residents only, 18s or over, Guarantees may be required.
Back
Vehicle Valuation
Compare Saved Vehicles
Top
Close
Your Cookie Settings
Select your cookie settings
Strictly Necessary Strictly Necessary cookies are essential to let you move around the website and use its features, such as accessing secure areas, shopping baskets and online billing. These cookies allow our website to provide services at your request.
Performance Performance cookies collect information about how you use our website e.g. which pages you visit most often, and if you experience any error messages. They also allow us to update our website to improve performance and tailor it to your preferences. These cookies do not collect any information that could identify you - all the information collected is anonymous. They will not be used to target adverts to you on other websites.
Functional Functionality cookies are used to remember the choices you make, e.g. your user name, log in details and language preferences. They also remember any customisations you make to the website to give you enhanced, more personal features.
Targeting Targeting cookies collect information about your browsing habits to deliver adverts which are more relevant to you and your interests. They also measure the effectiveness of advertising campaigns.
Save Settings
Cancel Changes

Your settings will take affect when you refresh the page or move to a new page. Find out more about cookies